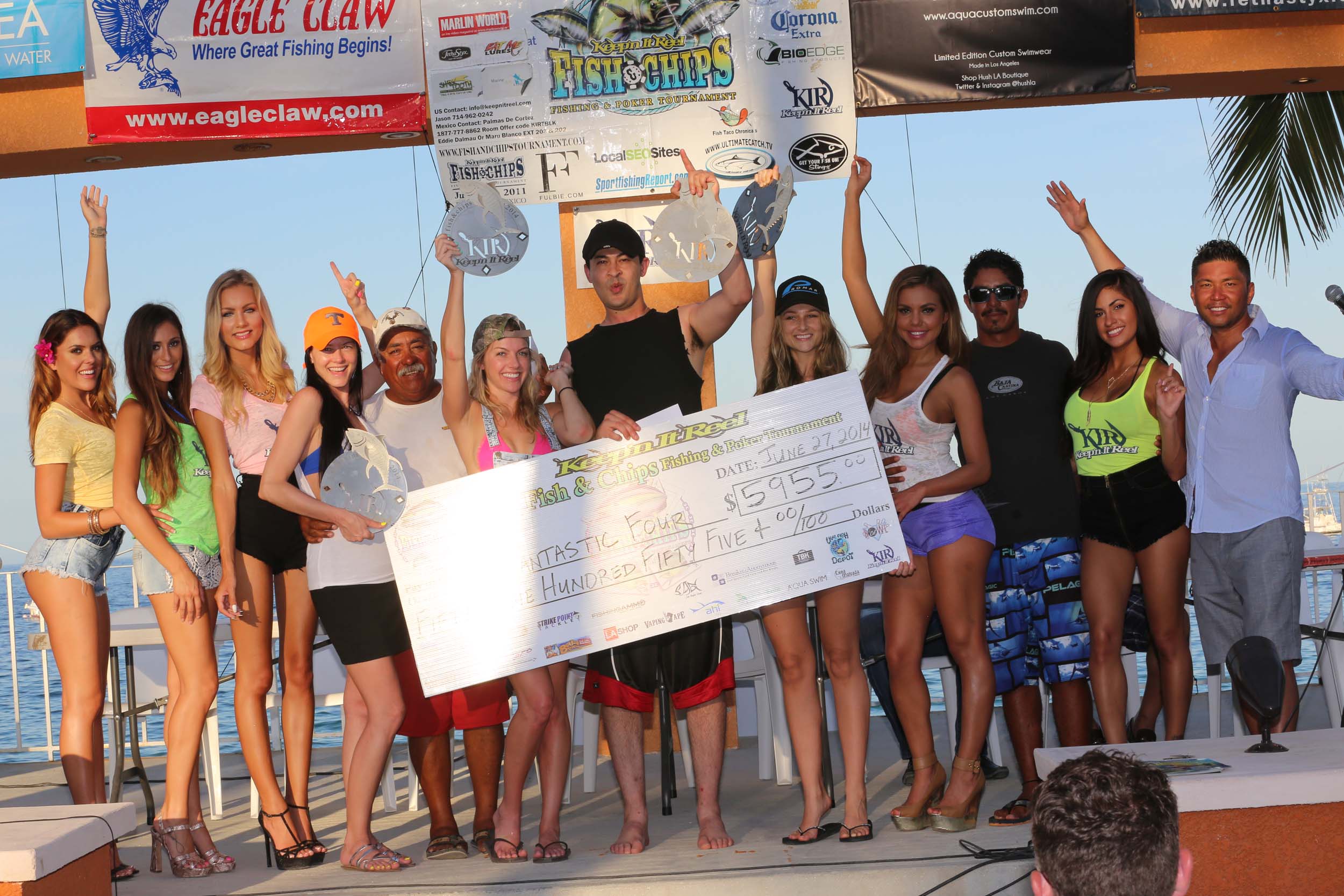 This week started out with threats of rain and wind, but other than a few rough boat rides, the fishing held up quite nicely.  We started the week with the arrival of the Keep’n It Reel Fish and Chips Tournament.  According to tournament organizer Tricia Saiki “The 2014 tournament was a huge success!  We had a record 28 teams/boats and 9 poker tables at this year's tournament.

Congratulations to our winning team "The Fantastic Four" aboard the Fresh Catch!!! First-timer's Erica, Jen, Ashlee, and Tamir landed an 81.1# Tuna to take home the grand prize of $4,000, a one week stay at the Hotel Palmas de Cortez, and two free days of fishing included.  They also took home the $200 side pot for heaviest Tuna. The captain and deckhand of the Fresh Catch also went home with a record $560 captain's side pot for winning this tournament.

The winning team for heaviest Dorado was also a first-time team.  "The Aquaholics" aboard the Miss Corona won the prizes for the heaviest Dorado and took home the $200 and $300 side pots with their 46# bull.  Congratulations to Mike, Paul, Newton and Guy!!!

Our winner for the grand prize in the poker tournament who almost swept the board on side pots was Junior!!!  Congratulations to Junior on your win!!!”

The rest of the week was a typical East Cape week.  Sailfish, Stripe Marlin, Blue Marlin, Dorado, Tuna, Roosters, Wahoo, Pargo, Grouper, Pompano, and jacks were all landed this week by anglers.  I cannot remember a year where I’ve seen so many big roosters than we are seeing this year.  Each week guests have been sending me pictures taken from their boat of 40-70lb. roosters.  Robert Dykes and his Family (see picture below) are down from Southern California this week and have been emailing me their pictures right from the lobby of the hotel.  As you can see from the pictures, they are having a blast with the roosters.   It has been steady throughout the season and we hope it continues.

The rains started on Thursday in Los Barriles and continue to fall as I’m sitting at my computer writing this report on Friday Afternoon, but that has not slowed the fishing one bit.  Today we had a few small tuna, dorado, sailfish, striped marlin, blue marlin, wahoo and roosters.  Everyone is happy and having a great time enjoying the great fishing.  That’s it for this week amigos!  Have a wonderful 4th of July weekend!  Eddie Dalmau/Baja’s Van Wormer Resorts